A protest-march that organisers say is against what they call “false prophets in South Africa,” will still go ahead despite legal overtures.

Organisers of a protest-march dubbed a “March Against False Prophets” scheduled for Wednesday, 14 March in Johannesburg, say the protest will go ahead, even with ongoing attempts by one charismatic church leader to interdict aspects of the protest. The protest-march is organised under various themes and hashtags, including ‘Stop Rape and Sexual Abuse’, #SexualAbuse, #BushiriMustFall, #NoDeception, #NoManipulation.

Speaking to Political Analysis South Africa on Monday, 12 March, one of the organisers of the protest, Solomon Izang Ashoms, said they convened to the demonstration in order to “allow the voices of the victims to be heard, as there is no “platform in the country to hear the stories of some the victims [of false prophets], and the pain that they carry – some of them carry personal guilt and condemnations.”

“Secondly, we want to present a memorandum, which is going to be read by one the victims, and we will present it to the Human Rights Commission, just so the government could really allow them to start investigating this, and for them to be able to pass this to the Hawks. So that we can get serious about it [the proliferation of false prophets and their impact on society and victims],” says Ashoms.

Ashoms also confirmed that lawyers acting on behalf of Shepherd Bushiri, founder of the Enlightened Christian Gathering (ECG) church approached the North Gauteng High Court in Pretoria to have his name removed from the protest material on social media, posters and flyers promoting the protest, which currently bear his name.

In the end, says Ashoms, the protest is necessary and will press ahead “because the Church [Christian community in South Africa] and the leadership of the Church have failed to address it [the proliferation of false prophets and their impact on society and victims]. We do not have a platform where such people [victims] could run to and to say this is my situation and gets it investigated, to found out if it is true, and what sort of evidence is there – because these are criminal offences that are being committed. But in Church what we do quite well is to just cover everything up, and say let it go, let God deal with it. But that is not how we should be.”

Attempts by this publication to make contact with a representative from the Enlightened Christian Gathering church were not fruitful. A call to the church on Monday, 12 March instructed us to make contact with one Shadrack Longwe in the morning of 13 March; however, the same phone number was not responsive on 13 March, despite our many attempts. 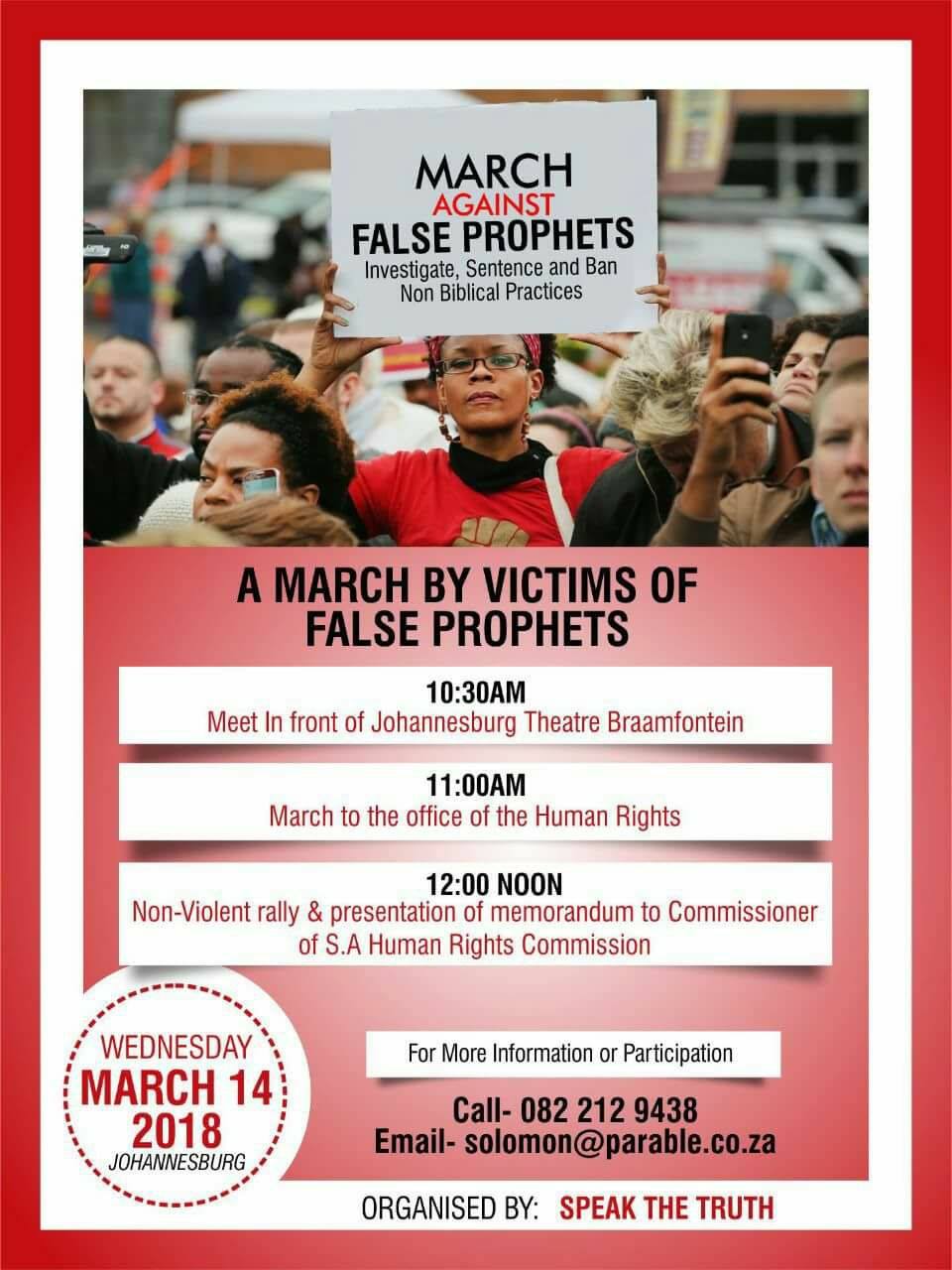